It is estimated that 200,000 Ganesh Murtis (Idols) are worshiped during Mumbai Ganesh Chaturthi. Of these 190,000 Ganesh Murtis are brought home by individual households and the balance 10,000 by registered Ganesh Mandals. What makes Mumbai Ganesh Chaturthi special is that most neighborhoods have their “Sarvajanik” (Public/Collective) Ganesha Idol and local residents participate enthusiastically in this Hindu Festival. Nowhere in the world is Ganesh Festival celebrated on the scale that is done in Mumbai.

How Are Big Mandals Celebrating Ganesh Chaturthi in 2020

“Maghi Ganesh Chaturthi” or “Ganesh Jayanti” is a Hindu festival that celebrates the birthday of Lord Ganesh. Since this festival falls in the Hindu Calendar Month of Magha, and during the Shukla phase of the moon, this festival is also known as “Magha Shukla Chaturthi” and “Varad Chaturthi”.

Ganesh Chaturthi 2020 Start Date: 22 August 2020. This is the date that households bring Ganesh Murtis to their homes. Ganesh Mandals formally unveil their idols and general public can come to worship. As per the Hindu Calendar, this day is Shukla Chaturthi (fourth day of the Waxing Moon) in the month of Bhadrapada.

Ganesh Chaturthi 2020 Day 2: 23 August, 2020. Many individual households keep their Ganpati Murtis for one and a half days. These idols are immersed on the second day of Ganesh Chaturthi.

Ganesh Chaturthi 2020 Day 3: 24 August, 2020. Individual households usually do the Ganpati Visarjan (Immersion) on this day. Generally, Ganesh Visarjan is done on odd days after the start of the festival (3rd, 5th, 7th day).

Ganesh Chaturthi 2020 Day 5: 26 August, 2020. Gauri Visarjan Day. The idol of Lord Ganesh’s Mother, Goddess Parvati (also called “Gauri”), is worshipped during Ganesh Chaturthi. Many Mumbai Ganesh Mandals have a small idol of Goddess Parvati. The fifth day is known as Gauri Visarjan (Immersion) Day. GSB Seva Mandal Ganesh, which is the richest Ganesh in Mumbai, is immersed on this day.

Ganesh Chaturthi 2020 Ganpati Visarjan Date (End Date): 1 September 2020. As per the Hindu calendar, the last day of Ganesh Chaturthi is on “Anant Chaturdashi”. Most big and small Mumbai Ganesh Murtis are Immersed (“Visarjan”) in water on this day. According to myth, Lord Ganesha leaves for his heavenly home of Mount Kailash. In Telegu Ganesh Visarjan is called “Vinayaka Nimarjana” and in Kannada it is called “Ganesha Visarjane”.

This is a list of some of the Best and Most Famous Ganesh Murtis (Idols) and Ganesh Mandals in Mumbai:

One of Mumbai’s most famous Ganesh Temple is the Siddhi Vinayak Temple at Prabhadevi. Please view this link for more information on Shree Siddhivinayak Ganapati Temple in Mumbai.

Which Ganpati Murti to visit in Mumbai Ganesh Chaturthi?

Tips for devotees to be able to see many large and famous Mumbai Ganesh idols in a limited time:

“Modak” is the most popular food associated with Ganesh Chaturthi. Also called “Ukadiche Modak”, Modak is a steamed, sweet dumpling with jaggery and coconut filling. Modak is thought to be Lord Ganesh’s favourite sweet food. 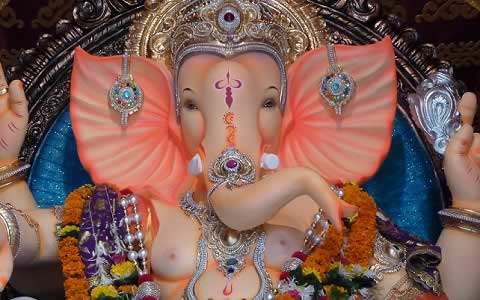 Why is Ganesh Chaturthi Celebrated?

Ganesh Chaturthi is the celebration of the birthday of Lord Ganesh. As per the Hindu calendar Lord Ganesh was born in “Bhaadrapada” on “Shukla Chaturthi” (fourth day of the waxing moon). As per legend Ganesha was born at noon.

Lord Ganesh is the Hindu God of Good Luck, Prosperity, Knowledge, New Beginnings and the Remover of Obstacles. This is why Hindus seek his blessings before starting a new venture.

NOTE: In addition to Ganesh Chaturthi, states of Maharashtra and Goa also celebrate “Ganesh Jayanti” as the birthday of Lord Ganesh. This day falls in the Hindu month of “Maagha” on “Shukla Chaturthi” (fourth day of the waxing moon).  Ganesh Jayanti is usually celebrated in end January or February.

Indian freedom fighter Lokmanya Tilak is credited with starting the community/public (“Sarvajanik”) Mumbai Ganesh Chaturthi celebrations. In the late 19th century British government imposed a ban on more than 20 people assembling. This was to prevent social unrest and protest against British rule. Religious gatherings were exempted from these rules.

The following year in 1893, Lokmanya Tilak urged his followers to hold “Savajanik” (public) celebration of Ganesh Chaturthi. He used these large public gathering to unite the community and protest against the British. The public (“Sarvajanik”) “Ganeshutsav” (Ganesh Festival) celebration is the reason that Mumbai Ganesh Chaturthi is world famous.

What Are Mumbai Ganesh Mandals And What Do They Do?

Mumbai Ganesh Festival is a “Sarvojanik” (Community/Public) celebration. The entire local community celebrates this festival. Volunteers from the community help with all aspects of Ganesh Chaturthi, which includes purchase of Ganesh Murti, decoration of the Ganesh Pandal, arrival of the Ganpati Murti, daily prayers (Ganesh Puja), crowd management and Ganpati Visarjan (Immersion).

Many localities in Mumbai have their local Ganesh Mandals. These are registered organizations that manage Ganesh Chaturthi in their locality. During Mumbai Ganesh Chaturthi the Municipal Corporation (BMC) grants special permission to these Ganpati Mandals to set up temporary structures (“Pandals”) on public spaces, such as roads, parks, etc.

Mumbai’s Ganesh Mandals get funds from individuals, local businesses and in some cases political parties.

Most large Ganesh Murtis are made of Plaster Of Paris (POP). This material is used since it can be molded and shaped into complex structures. This helps create innovative Ganesh statues.

Unfortunately Plaster of Paris is not environmentally friendly. During Ganpati Visarjan, Ganesh idols are immersed in the Mumbai Sea, Lakes and water bodies. Sadly this causes water pollution.

Another major source of environmental pollution is the material used for decorating Ganesh Pandals (temporary stage/structure where the idol is kept). Thermocol is a popular choice of material; sadly it is not eco-friendly.

There have been repeated pleas to switch to more eco-friendly options such as clay. Clay dissolves easily in water. Unfortunately it is difficult to use clay for large Ganesh Murtis because it cannot be shaped properly. Ganesh Murti made of Shaadu Clay are heavier and more brittle as compared to POP statues.

The good news is that individuals, who usually purchase small Ganpati Idol buyers, have started buying statues made of eco-friendly material. Clay used for making Ganesh Murti is called “Shadu” in Maharashtra.

Are Ganesh Idols made of clay eco-friendly? Sadly even Ganesh Murtis made of clay have some issues. They take 3-4 weeks to dissolve, unlike Papier Mache (Paper) Ganesh Idols that take only a few days. POP Ganesh Murtis take 3-4 months to fully dissolve. Most Ganesh Idols (Clay, Paper and POP) are painted with synthetic paints that are not eco-friendly. Some Ganesh Sculptors have started using natural paints. Like the POP Murtis, the Clay Ganesh Idols too make the water murky when they dissolve. This prevents sunlight from entering the water, which in turn has a negative impact on fishes and the flora and fauna living in the water. Reduced sunlight leads to reduced oxygen which is harmful to sea life.

Tamil Nadu has banned the use of Plaster of Paris. Tamil Nadu Ganpati Idols are made of Clay, Papier-Mache and Coconuts. Lord Ganesh is popularly called “Vinayaka” and “Pillayar” in Tamil Nadu. Goa is another state where the use of POP for Ganesh statues is banned.

This is a list of some of the famous Ganesh Idol Makers (“Murtikars”) in Mumbai.

This article has information on the Main Ganesh Visarjan (Immersion) places in Mumbai.

Most Ganesh Mandals in South and Central Mumbai prefer to immerse their Ganesh Murtis in Girgaum Chowpatty. Special arrangements are made for Ganpati Visarjan. Hundreds of thousands of devotees come to Chowpatty for Visarjan. Despite the large number of people and Ganesh Idols, it is a smooth operation.

Large Ganpati Murtis wait in line to be taken to the sea. A final Ganesh Pooja and Aarti are done on the sea shore. Devotees and volunteers drag the Ganesh Idols on wheeled platforms to boats. These boats take the Ganpati Murti deeper into the sea, where they are immersed in the sea.

Mumbai Police, BMC personnel, Coast Guard and thousands of volunteers ensure a smooth flow of people, Ganesh processions and traffic. It’s a wonder to see how a large operation like this works smoothly.

In Mumbai Ganpati Visarjan is done in 27 artificial and 71 natural ponds and water bodies.

The Visarjan for Mumbai’s most visited Ganesh Murti, “Lalbaugcha Raja” starts in the afternoon. After doing a round of lalbagh area, so that local residents can offer their final prayers, the organizers get the idol ready for immersion. The final immersion happens at Girgaum Chowpatty at 6:00 am on the next morning. This is a link to Lalbaughcha Raja Visarjan Route from Lalbaug To Girgaon Chowpatty.

Famous Hindu Temples And Places Of Worship In Mumbai